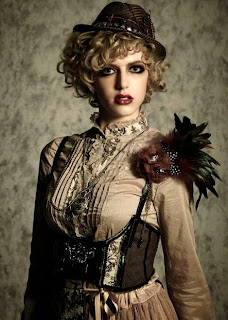 That steampunk is a rising star on the Japanese fashion scene is something that's been quite known for a good while now.
More and more Japanese are interested in the momevement, or elements thereoff, and it's starting to show quite regularly.

First of all there is the Tokyo based steampunk ensemble Strange Artifact, the band that comes with their own steampunk accessories label Poorman's Gold Label.
A brand that is not only for sale at their concerts or whenever the band gets a stand at things such as Design Festa or ArtisM Market events, but also in select stores throughout the city.

Secondly there are the regular steampunk events, SteamGarden.

And thirdly, big name brands, mostly street fashion ones, have picked up on steampunk on a regular basis.
Especially lolita brands have hopped on the band wagon quite regularly, especially brands such as Alice and the Pirates; Metamorphose, Temps de Fille and Innocent World.

But all of that is just to give you some very basic background of what's happening in the scene over in the land of the rising sun.
Today I'd like to write about the latest fashion addition going steam: h.NAOTO with their h.NAOTO STEAM.

h.NAOTO has been around for absolute ages, it is generally one of the more visual kei type brands, and is known for it's collaborations with artists of all kinds of disciplines and most noteworthy musicians from famous Japanese brands such as LUNA SEA and X JAPAN.
It's not the first time that the label has delved into a different style of fashion, combining other aesthetics with their own typical look, as they have previously released lolita and aristocrat style/inspired sub brands GRAMM and FRILL.
So now there is STEAM as well.

It started with an announcement earlier this month on one of the shop blogs, a post on creator Naoto Hirooka's facebook and now the clothes are for sale on their webshop.

Now don't expect much typical victoriana style steampunk from this brand, which is the look most people associate with steampunk fashion.
Instead h. NAOTO STEAM is a mash up of visual kei and contemporary steampunk, historical elements are visible here and there, but they are mostly staying true to their original aesthetic and adding steampunk to the mix for a more ragamuffin type look.
Which is especially cool for those that simply aren't into clean lines and victorian elements.

It also proves that the Japanese are, much more than many western designers, very much unafraid of shedding the supposed "rules" (in as far as there are rules to begin with, but that aside) of steampunk fashion and make it a point of proving that one does not need to look victorian(eske) to indeed be steampunk.
Some of their things may look doubtful as steampunk garments at first glance, but think up combinations in your head, and then you'll realise they'd indeed work.

Even though most are pieces I personally wouldn't wear, I applaud this brand for making the step into steampunk all the whilst staying true to their own aesthetic in the process.
Hopefully more will follow suit, as I do believe that the unique view that the Japanese have will only enrich the global movement.